Schuhplatteln,
which means slapping the shoe soles, originated in the Alpine regions
of Austria and Bavaria during the 17th century, and had a very practical
beginning.

During the winter months, when the
men went into the mountains to cut wood they spent their evenings
in a wooden cabin. Partly as entertainment, butmostly as a means
of keeping warm, they began jumping up and down and slapping their
thighs. This developed into a sort of competition tosee who could
jump the highest or stamp their feet the loudest. The story also
goes that they had watched the male grouse drumming and strutting
in the woods, and that some of the dance steps which were later
developed depicted this ritual. 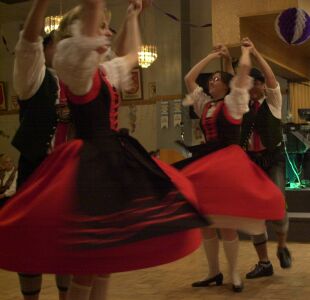 After several weeks in the mountains,
when the young woodchoppers returned to their villages, they tried
to impress the girls with their Schuhplatteln.
Over the years many different dances evolved, and the various steps
were set to music. By the nineteenth century, women were added to
the tradition, bringing it to its present-day form. 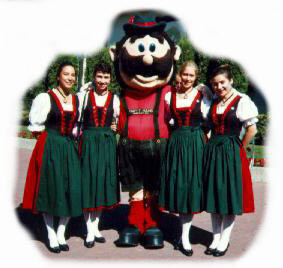 The
Bavarian Schuhplattlers of Edmonton
were formed in 1971 by three couples who wanted to preserve the
culture and traditions of their Heimat
in Bavaria. Their early performances were mainly in the Edmonton
Hofbräuhaus. The costumes worn by these members were actually
hand-sewn by the Mädels; later, the
group imported their Tracht from the
Chiemgau area of Bavaria.
The dances remained true to their original form, although flavoured
by the imagination and sense of humour of the i 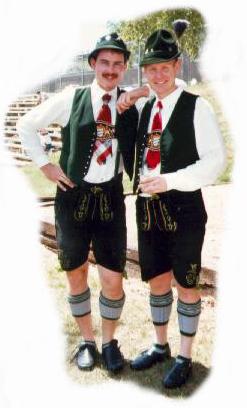 The group has grown considerably over
the past quarter-century, and currently boasts a membership of twenty
men and women. They continue to encourage new membership among those
who feel young and hearty enough to commit themselves to regular
and vigorous Thursday night practices.

As mentioned above, the Tracht,
or costume, originates from the Chiemgau
area (50 km SE of Munich) around 1900.
The ladies in the group wear a white blouse with puffed sleeves,
under a sleeveless dress made with laced bodice and a full Dirndl
skirt. The dresses, in a variety of colours, are actually imported
from Germany, as are the Lederhosen
that the men wear. These dresses are always worn with an apron,
white knee socks and black pumps. The ladies also wear an actual
Edelweiss blossom, encased in glass
and hung as a pendant from a black velvet band. Should you have
the pleasure of witnessing the Bayrisch Guck
dance, you will see that the girls wear lace-trimmed bloomers under
their Dirndls!

The men are typically dressed in black
leather trousers, trimmed with light-green embroidery, white shirts
with red ties, and dark-green velour hats. In most cases, the hats
are adorned with a Gamsbart, the beard
of a Gemse, or chamois; despite its
name, it is harvested from the manes of Bavarian mountain goats.
The costume is completed by either traditional Wadenstrümpfe
(calf socks) or full-length Kniestrümpfe,
as well as leather Haferlschuhe.

When they travel, the Bavarian
Schuhplattlers take not only
their costumes, but a wide assortment of props – their scythes,
axes, saws, hammers, chisels, lanterns, a Maibaum
(maypole) for their special “May Day” dance, and in many cases a
massive log or two for the Holzhackertanz
(Wood Choppers Dance). As well, the audience delights to see and
hear the girls playing a variety of traditional folk songs on precisely
tuned cowbells. Edelweiss and the Kufsteinlied
are two songs of the many they have in their repetoire.