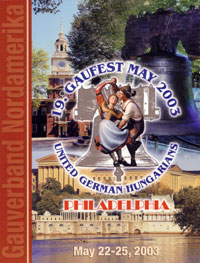 From
May 22-25, 2003 the Bavarian Schuhplattlers of Edmonton participated
at the 19. Gaufest in Philadelphia. Fourteen members of
our group (13 dancers and one musician) were able to take the
time off work and flew to the East Coast of the United States
to take part in this unique event. Having last attended a Gaufest
four years ago in St. Paul (Minnesota), the members of the Bavarian
Schuhplattlers agreed to make an effort to go again this year.

The Gaufest is a biannual gathering of the member groups of the
Gauverband
Nordamerika, the head organization of North American folk
dance groups that promote Bavarian and Tyrolean folk dancing,
costumes, customs and culture. The Gaufest is open to all Schuhplattler
groups and people who are interested in German culture and heritage.
The main events at the Gaufest were the group, single and youth
competitions (Preisplatteln, Einzelplatteln and Jugend
Einzelplatteln), dance and music workshops, a festive evening
reception (Festabend), parade, and the Sunday mass and
flag blessing (Mundart Messe mit Fahnenweihe) follow by
a final picnic.

For the newer members who have joined our group in the last few
years it was quite an experience on our arrival to see over 2000
Schuhplattlers, all dressed in authentic costumes (Tracht).
The first few nights saw the visiting groups each present a dance
to honour the event (Ehrentänze). It was very interesting
to see the different styles of dancing, and the various interpretations
of the dances. Our group had the privilege to perform two such
dances on different nights; we were quite nervous to perform before
such a knowledgeable audience. However, we received much encouragement
and praise, especially for the “Mader“,
one of our signature dances. As many of our regular supporters
in Alberta will know, the “Mader” is a courting
dance, and was noted at the event for its distinct style and choreography.
In addition our ladies received compliments for their “Dirndl”
dresses.

In contrast to the variety of dances and styles of the Ehrentänze
was the competitive group dancing (Preisplatteln). Sixteen
groups participated in this endeavour, all seeking the coveted
Wanderpreis (a hand-carved wooden dancing couple dressed in Tracht,
donated by the Bavarian government). Only three dances are performed
in competition (Reit-Im-Winkel,
Haitauer,
Haushammer),
and the groups draw the previous day to determine which one they
will dancer, and in which order they will compete. Emphasis is
on strict compliance with rules: accuracy and execution of the
dance steps, uniformity in movement, posture, clapping, and correct
display of the Tracht. This year’s winner of the Preisplatteln
was the Bayern Verein Newark NJ, followed by the host group, the
German Hungarian Schuhplattlers. Third place were Die Gemütlichen
Enzianer from Maspeth, NY. 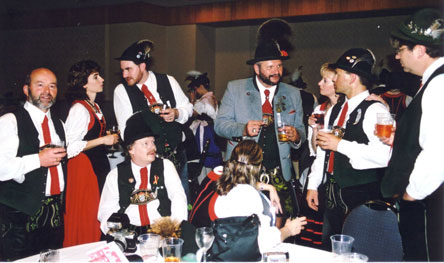 The
competition day ended with a huge and festive banquet at the Philadelphia
Convention Centre. All groups were dressed in their finest Tracht,
an excellent display of how the traditions of Southern Germany
are kept alive in North America. One highlight of the evening
was the parade of the banners. The banners of the different groups
are masterworks in embroidery; at 5′ by 5′ in size they are massive.
The flag bearers must be very strong, and must be careful to maintain
balance. The flags are usually made of velvet and have colorful
stitching showing crests and dancers. We are starting to think
about a nice flag for ourselves too; the cost is only $10,000
to $20,000 US!

The final day of the Gaufest began with a procession of all the
groups through downtown Philadelphia to the magnificent St. Peter
and Paul Cathedral where a traditional mess (Mundart Messe) was
held. The Gaufest ended with a large picnic back at the convention
center.

While talking throughout the Gaufest with fellow Trachtlers,
our group has affirmed its plans to join the Gauverband Nordamerika.
To become member of the Gauverband we will have to present one
couple in authentic Tracht at the next Delegates’ meeting of the
Gauverband next year in Lancaster, PA. Currently we are researching
which region in Bavaria we want to portray, and are excited about
unveiling our formal Tracht in the near future to the Edmonton
community.

The Gaufest was a great source of inspiration and motivation
for all of us. Everybody had a wonderful time. We renewed the
connections with fellow Trachten groups and made new friends.
We learned new dances to add to our repertoire; we even learned
a line dance to “Anton from Tirol”, a song currently
popular on the German “Hitparade”! The Gaufest also
reminded us of the goal of our group to preserve the German heritage,
and in particular the Trachten and Schuhplattler tradition of
Bavaria.

We will gladly follow the new motto of the Gauverband Nordamerika: