This year’s Heimatabend was held on Saturday,
April 24, 1999. The Group performed to a packed hall at the German-Canadian
Cultural Centre Edmonton. Besides the usual performances
by the Group, the crowd saw a cow-milking competition between two
“Alberta red-necked plattlers” (left), witnessed a funeral
march for one of the young
Burschen (below right), and heard a lively cowbell rendition of
Bier her, Bier her (below left). 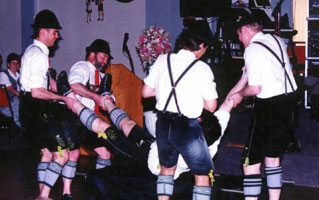 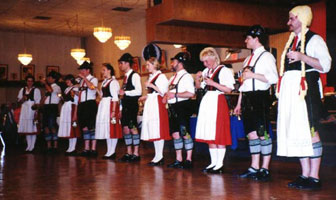 As well, Premium
Akkord, straight out of Calgary, provided dance music throughout
the evening. Next year’s Heimatabend 2000
promises to be even better than this year’s was… it will be tough
to do, but our boys and girls are already preparing with new ideas. 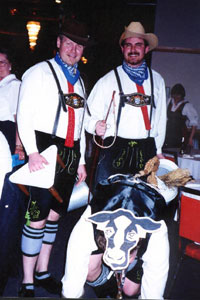